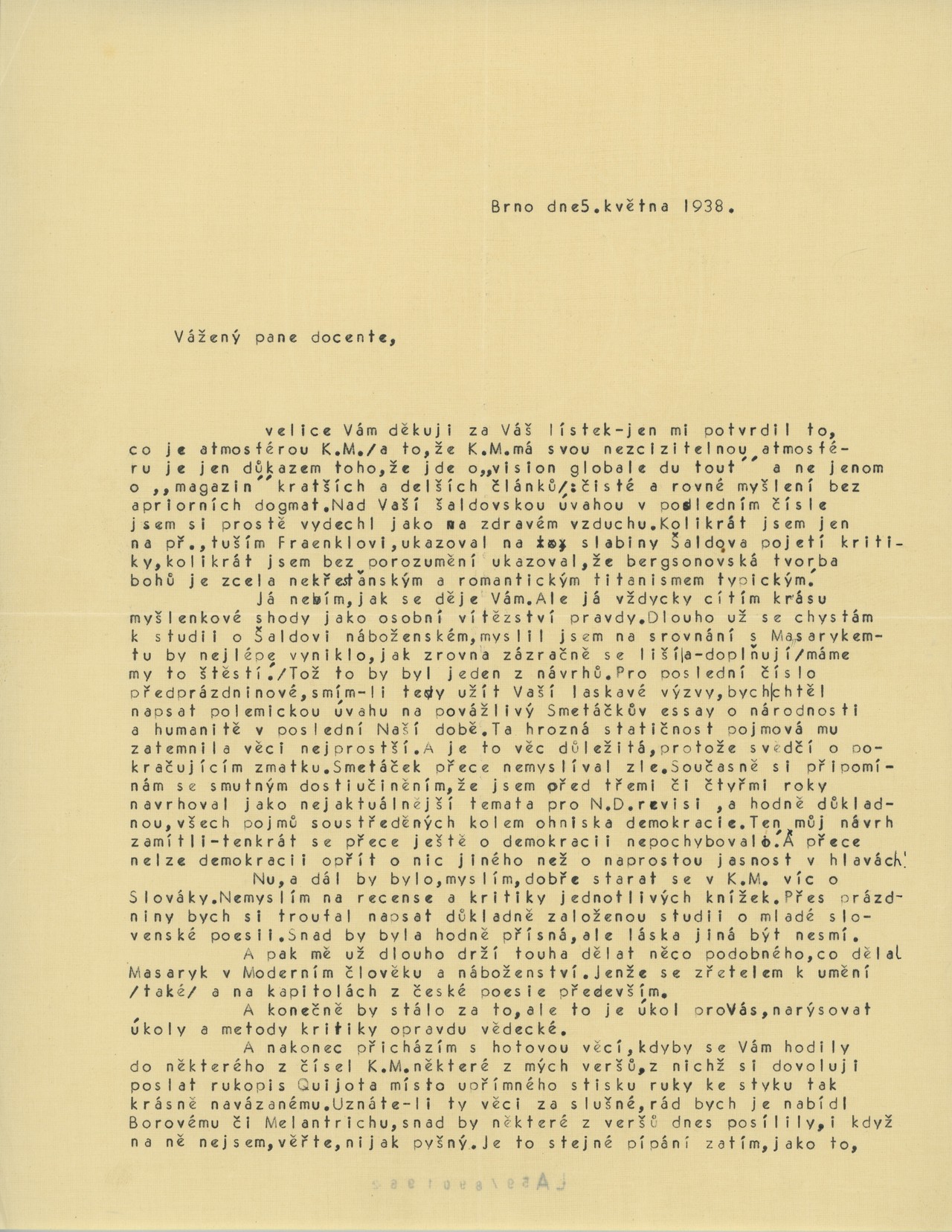 Brno. 5 May, 1938.
Dear Associate Professor Černý,
Thank you very much for your letter – it confirmed for me the atmosphere at K.M., (and the fact that K.M has its inalienable atmosphere is proof that it is a “vision global du tout” and not just a “magazine” of shorter and longer articles): pure and balanced thinking without a priori dogmas.
It felt like a breath of fresh air to read your piece on Šalda in the latest issue. So often I have pointed out the weaknesses of Šalda’s concept of criticism to e.g. Fraenkl I think; so many times I have shown, without anyone understanding, that the Bergsonian creation of gods is utterly typical non-Christian and Romantic titanism.
I don’t know how it makes you feel, but I always feel the beauty of the consensus of thought as a personal victory of truth. I have long been preparing to write a study on the religious Šalda, perhaps in comparison with Masaryk – this would best be done by showing how miraculously they differ, and, at the same time, complement each other (we are fortunate for it). That would be one of the proposals. For the final issue before the holidays (If I may take you up on your kind invitation), I would like to write a polemical piece on Smetáček’s worrying essay on nationality and humanity in the last issue of Naše doba (Our Age). That horrible conceptual staticity obscured from him the simplest things. And this is an important thing since it shows continuing confusion. Yet Smetáček didn’t used to be a bad thinker. At the same time, I recall with sad satisfaction that three or four years ago I proposed as the most pressing theme for N. D. a review, and very thorough at that, of all the concepts centred around the focal point of democracy. They rejected my proposal – democracy was still then not in doubt. And yet democracy cannot be based on anything other than absolute clarity in people’s minds.
Well, I also think it would be good to devote more attention to the Slovaks in K. M. I don’t mean reviews and criticism of individual books. Over the holidays, I would like to write a well-founded study of young Slovak poetry. It might be quite strict, but love must not be otherwise.
And then I have long held the desire to do something similar to what Masaryk did in Moderní člověk a náboženství (Modern Man and Religion), but with regard to art (among other things) and in chapters from Czech poetry in particular.
Finally, it would be worth it, though this is a job for you, to outline the tasks and methods of truly scientific criticism.
And finally, I come to you with a completed work: Let me know if some of my poems would be suitable for an issue of K.M. Instead of a handshake confirming a relationship we have forged so beautifully, allow me to send the manuscript to my Quixote poems. If you feel they are good, I would like to offer them to the F. Borový or Melantrich publishing houses – perhaps some of the verses would provide strength today, even though I am not, believe me, proud of them. So far, it’s the same peeping as (…) 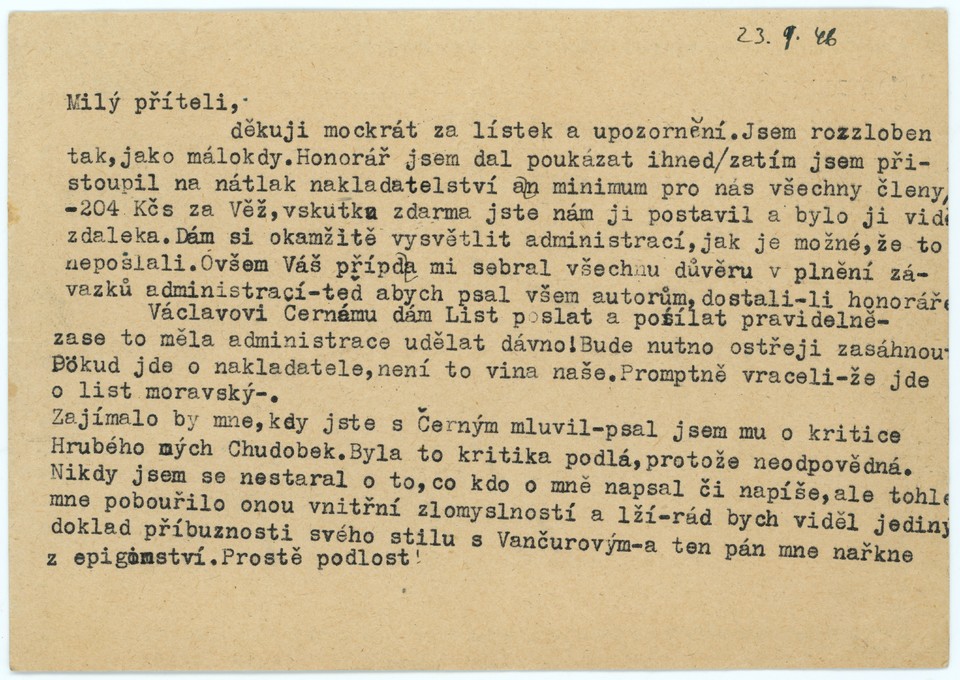 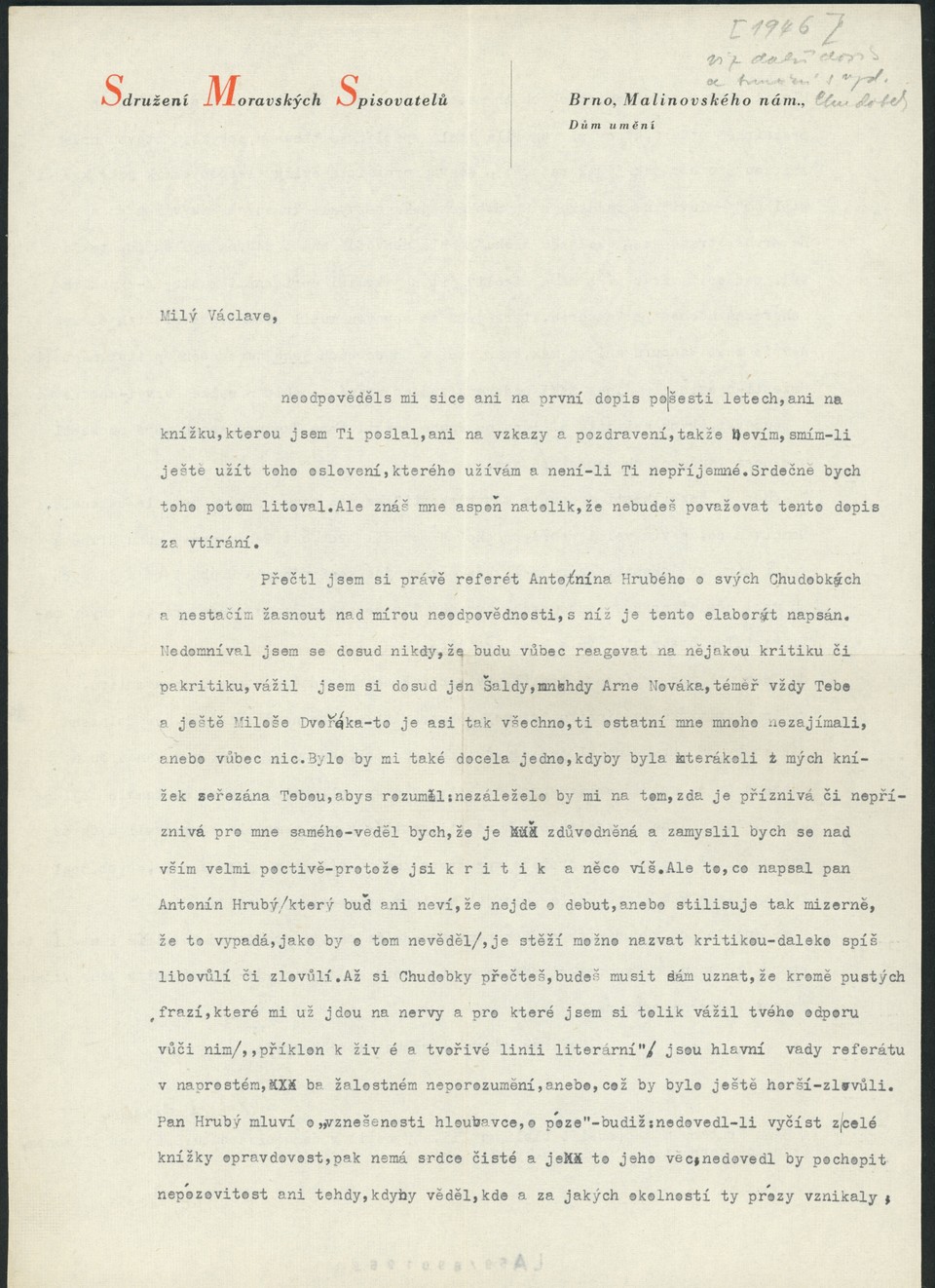