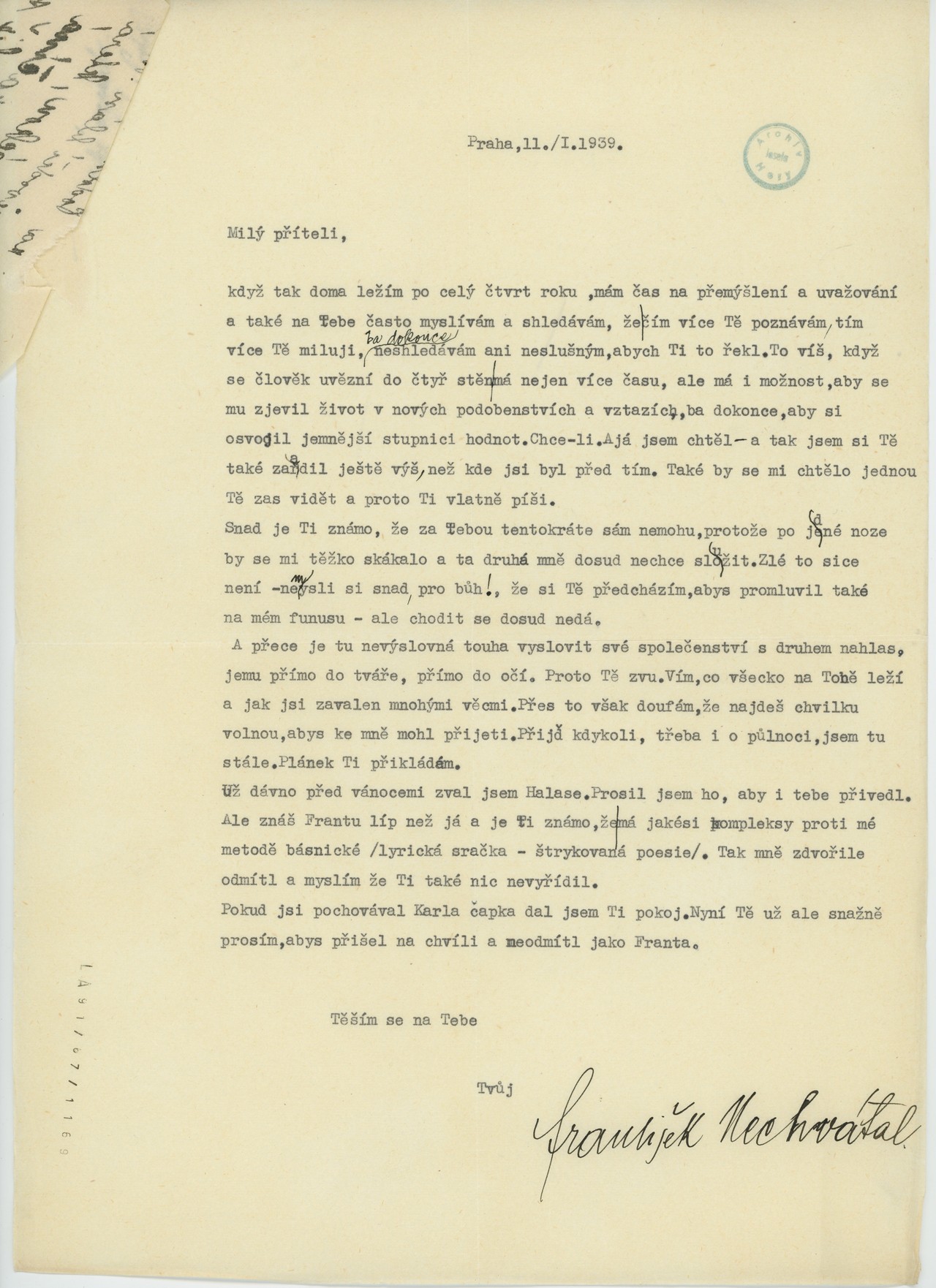 Prague, 11 Jan. 1939.
My Dear Friend,
Since I’ve been lying at home for three whole months, I’ve had time to think and reflect, and I also often think of you and find that the more I get to know you, the more I love you and don’t even find it inappropriate to tell you. When one is confined by four walls, he not only has more time, but also the opportunity to see life in new parables and relationships, and even to adopt a finer scale of values. If he wants to. And I wanted to – so I also ranked you higher than you were before. I would also like to see you again someday, which is actually why I’m writing you.
Perhaps you know that I cannot go to see you this time because it would be hard for me to jump on one leg and the other one doesn’t want to serve me yet. Although it’s not bad – don’t think for God’s sake that I’m ingratiating myself to you so that you’ll also speak at my funeral – I still can’t walk.
And yet there is an unspeakable desire to express one’s community with another out loud, right to his face, right to his eyes. Which is why I’m appealing to you. I know you’ve got your hands full, but I hope that you’ll find a free moment to come see me. Come whenever you want, even if it’s at midnight. I’m here all the time. I’ve enclosed some directions for you.
I called Halas a long time ago. I asked him to bring you along. But you know František better than I do, and you know that he has some complexes regarding my poetic method /lyrical shit – knitted poetry/. So, he politely turned me down and I think he probably didn’t arrange anything with you either.
I left you alone while you were laying to rest Karel Čapek. But now I beg you to come for a while and not refuse like František did.
Looking forward to seeing you.
Yours, František Nechvátal 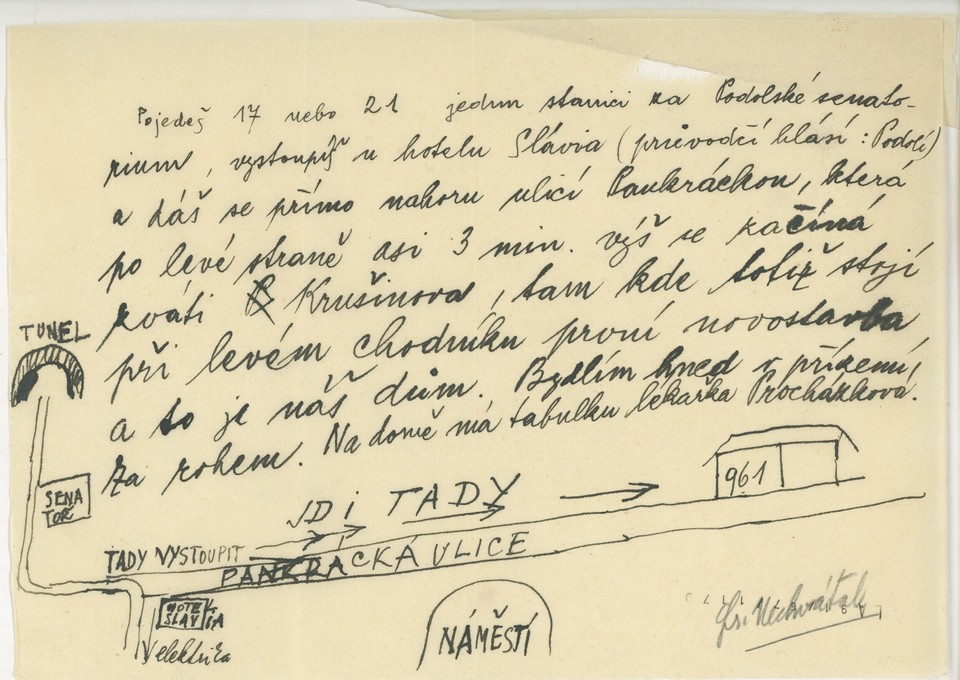 Enclosed card: Take tramway 17 or 21 one station beyond Podolské sanatorium, get off at the Slávia Hotel (when the conductor announces “Podolí”) and walk straight up Pankrácká street which about 3 minutes up the left side turns into Krušinova street where a new building stands by the left sidewalk. This is where we live. Our flat is right on the ground floor around the corner. Dr. Procházkova has her sign on the building.

Other exhibits from the chapter František Nechvátal 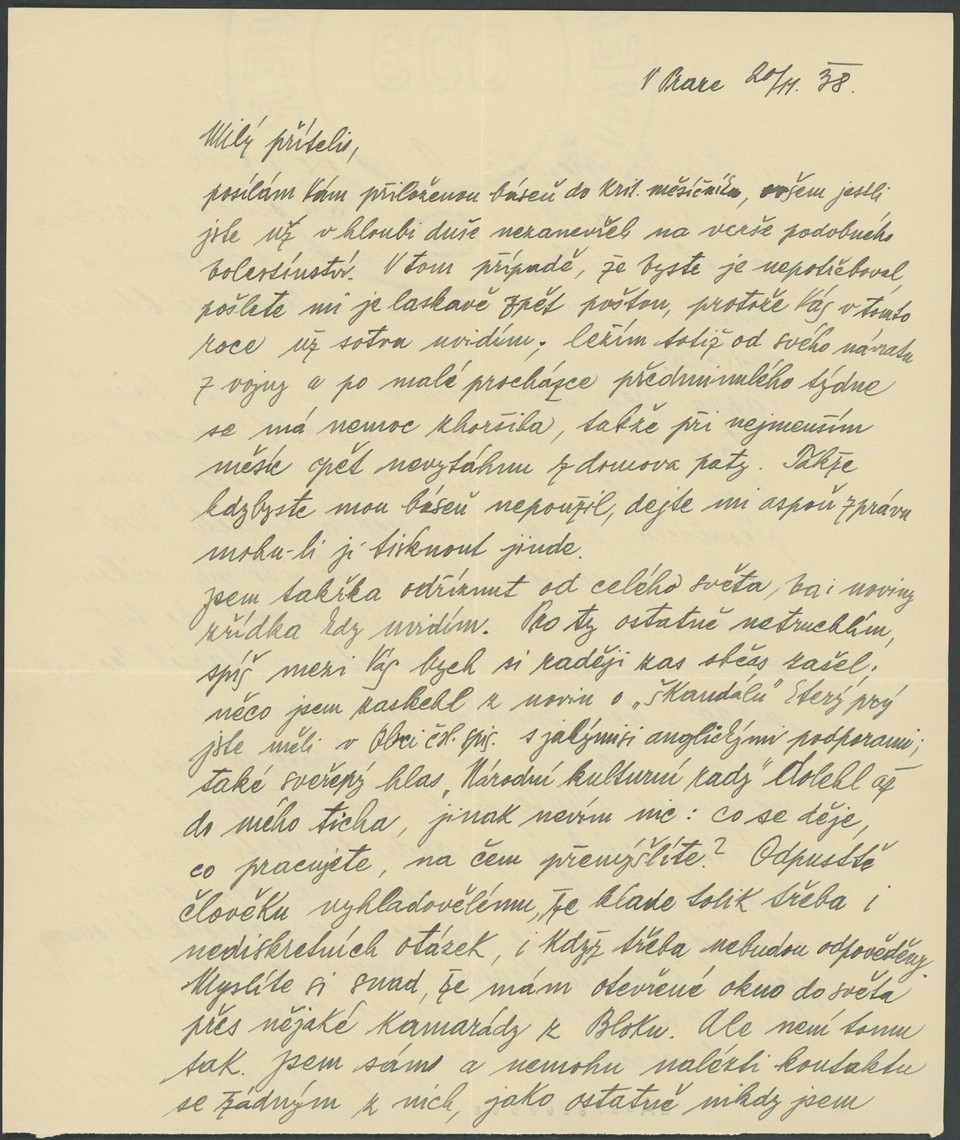 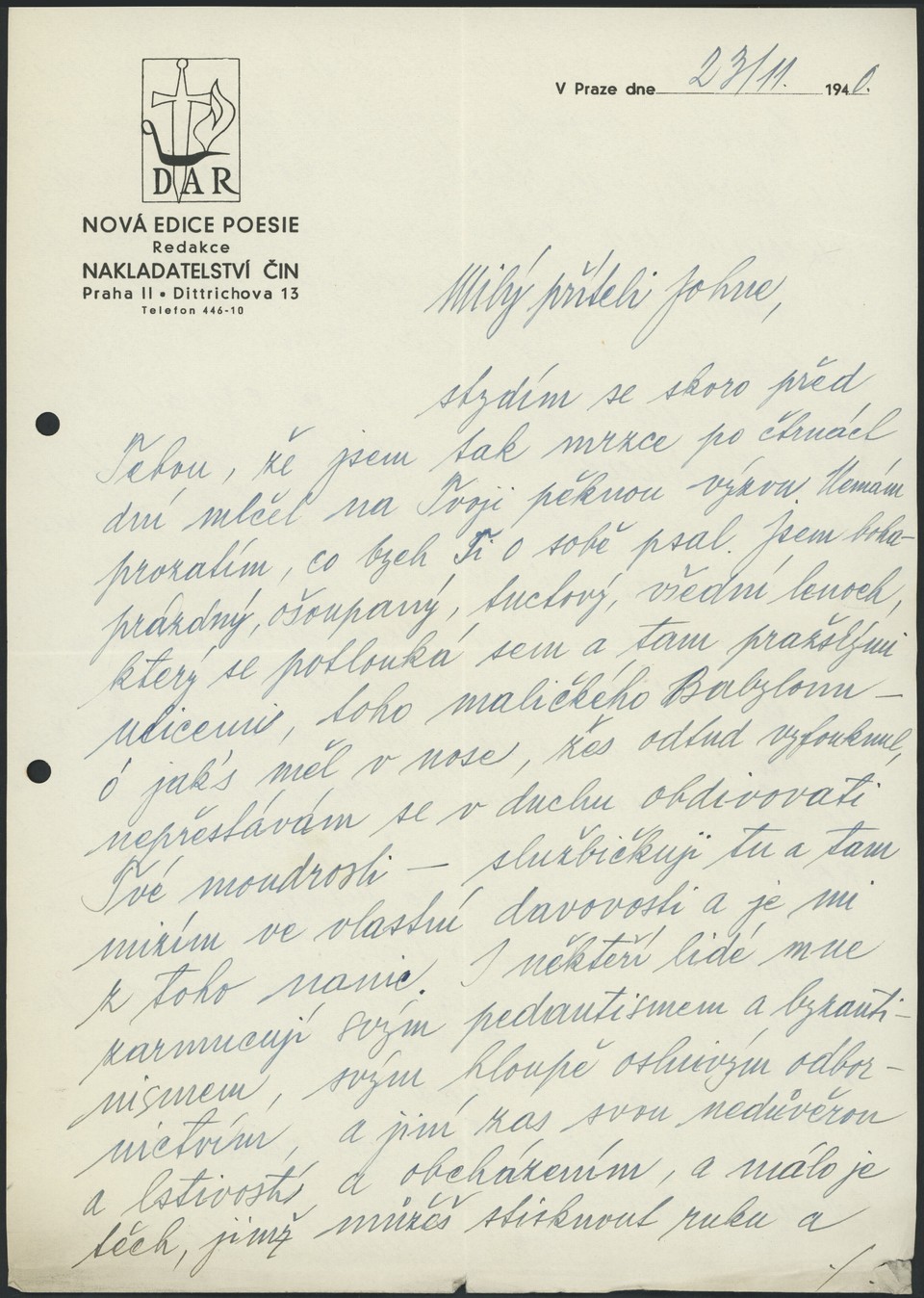 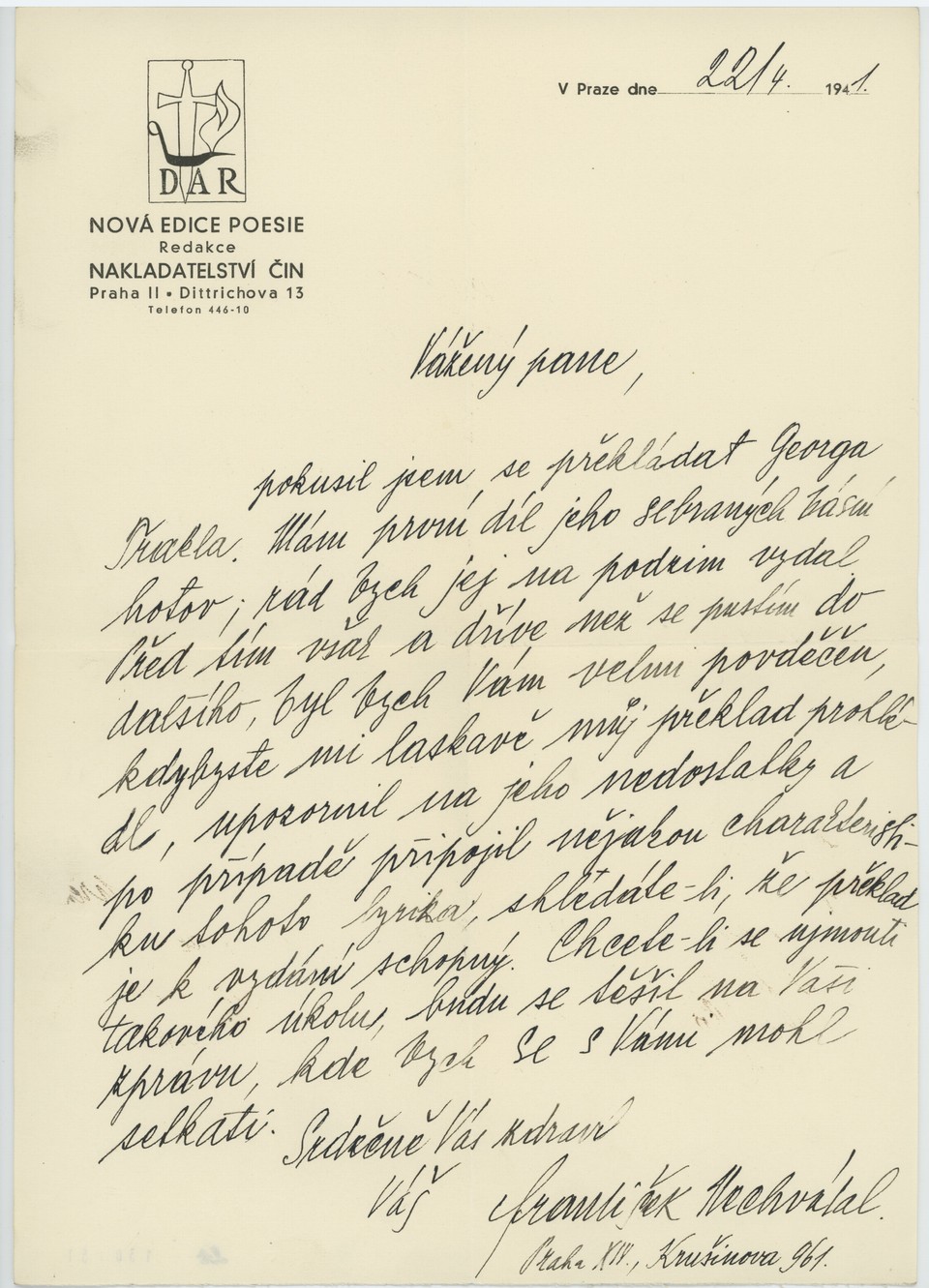 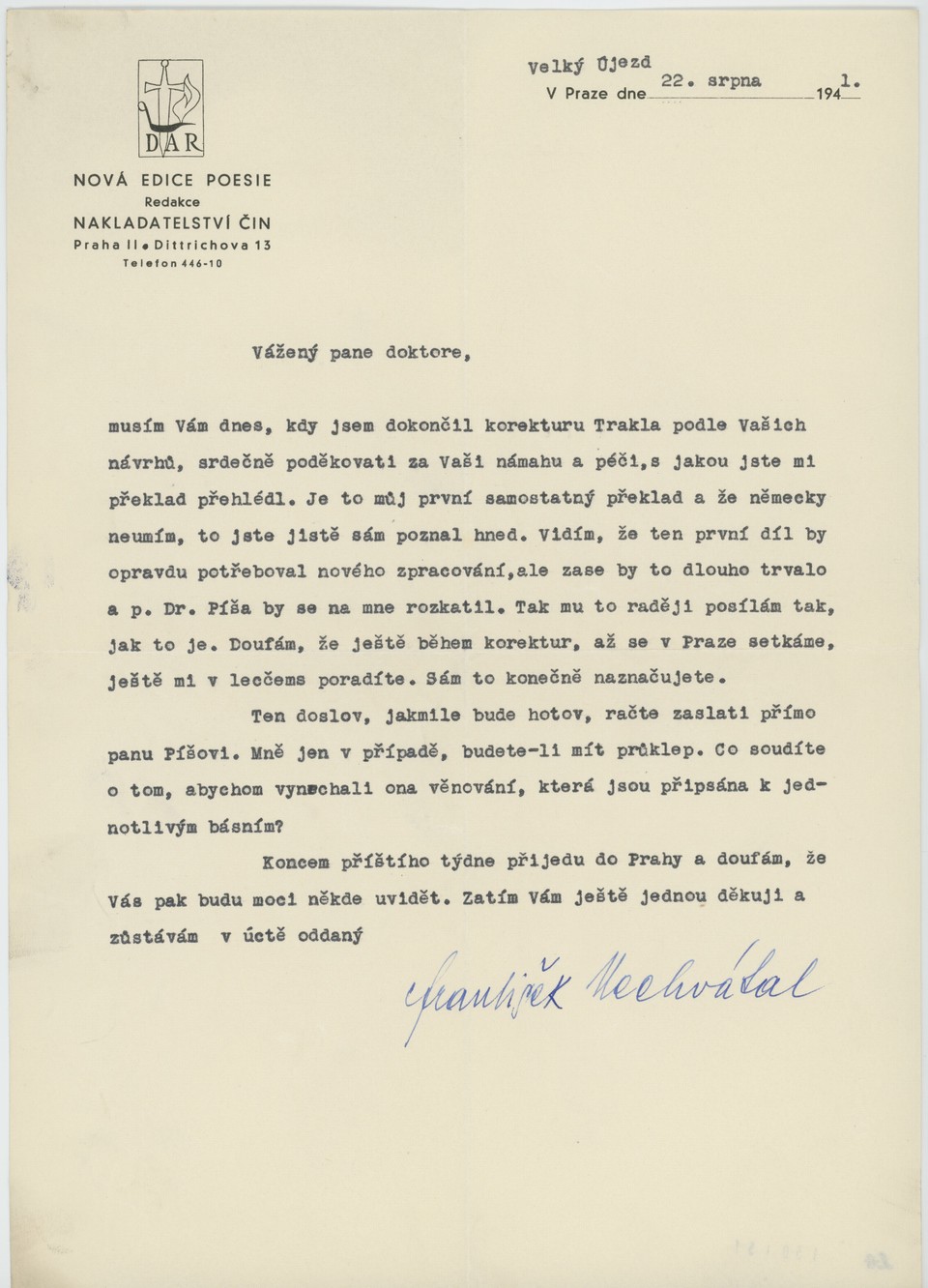