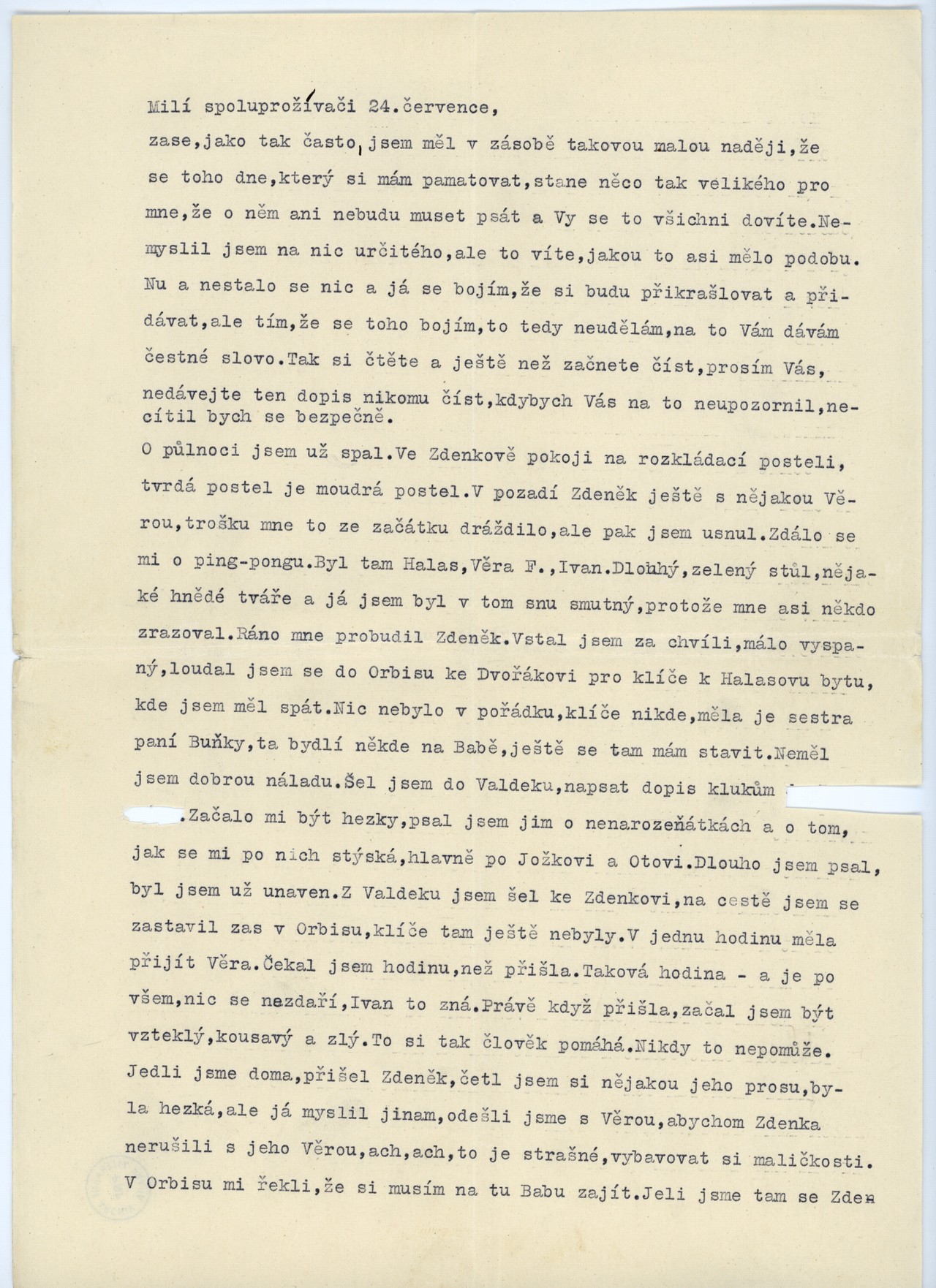 Dear Fellows of July 24th,
Once again, as so often, I had so little hope that on that day which I shall remember something so great would happen to me that I would not even have to write about it, and you would all still find out about it. I didn’t mean anything specific, but you know what form it probably took. Well, nothing has happened and I’m afraid that I will embellish it, but the fact that I’m afraid will prevent me from doing it; I give you my word. So read on, but before you start, I would like to ask that you not give this letter to anyone – If I didn’t ask you that in advance, I wouldn’t feel secure.
I was asleep by midnight – in Zdeněk’s room on the foldout bed, a hard bed is a wise bed. In the background was Zdeněk with some Věra; it irritated me a bit at first, but then I fell asleep. I dreamt of ping-pong. Halas, Věra F. and Ivan were there. A long, green table, some brown faces, and I was sad in the dream, probably because someone was betraying me. Zdeněk woke me in the morning. I got up for a while, having slept poorly, and wandered to Orbis to get the key from Dvořák to Halas’s flat where I was supposed to sleep. Nothing was in order, the keys were nowhere, the sister of Mrs. Buňka had them, she lives somewhere at the Baba housing estate, I’m supposed to stop by there. I wasn’t in a good mood. I walked to the Valdek to write a letter to the boys.
I began to feel better; I wrote to them about the unborn and about how I miss them, especially Jožka and Ota. I wrote for a long time and was already getting tired. I walked from the Valdek to Zdeněk’s and stopped by the Orbis publishing house again on the way. The keys still weren’t there. Věra was to arrive in an hour. An hour like this – and it’s all over, nothing will work out, Ivan knows how I feel. When she arrived, I started to get angry, caustic and mean. That’s how you help yourself. It never helps. We ate at home. Zdeněk arrived and I read some of his prose, it was nice, but my thoughts were elsewhere. Věra and I left so that we wouldn’t disturb Zdeněk with his Věra. Oh, is it ever terrible to recall the details. At Orbis they told me that I had to go to that Baba housing estate. I went there with Zdeněk 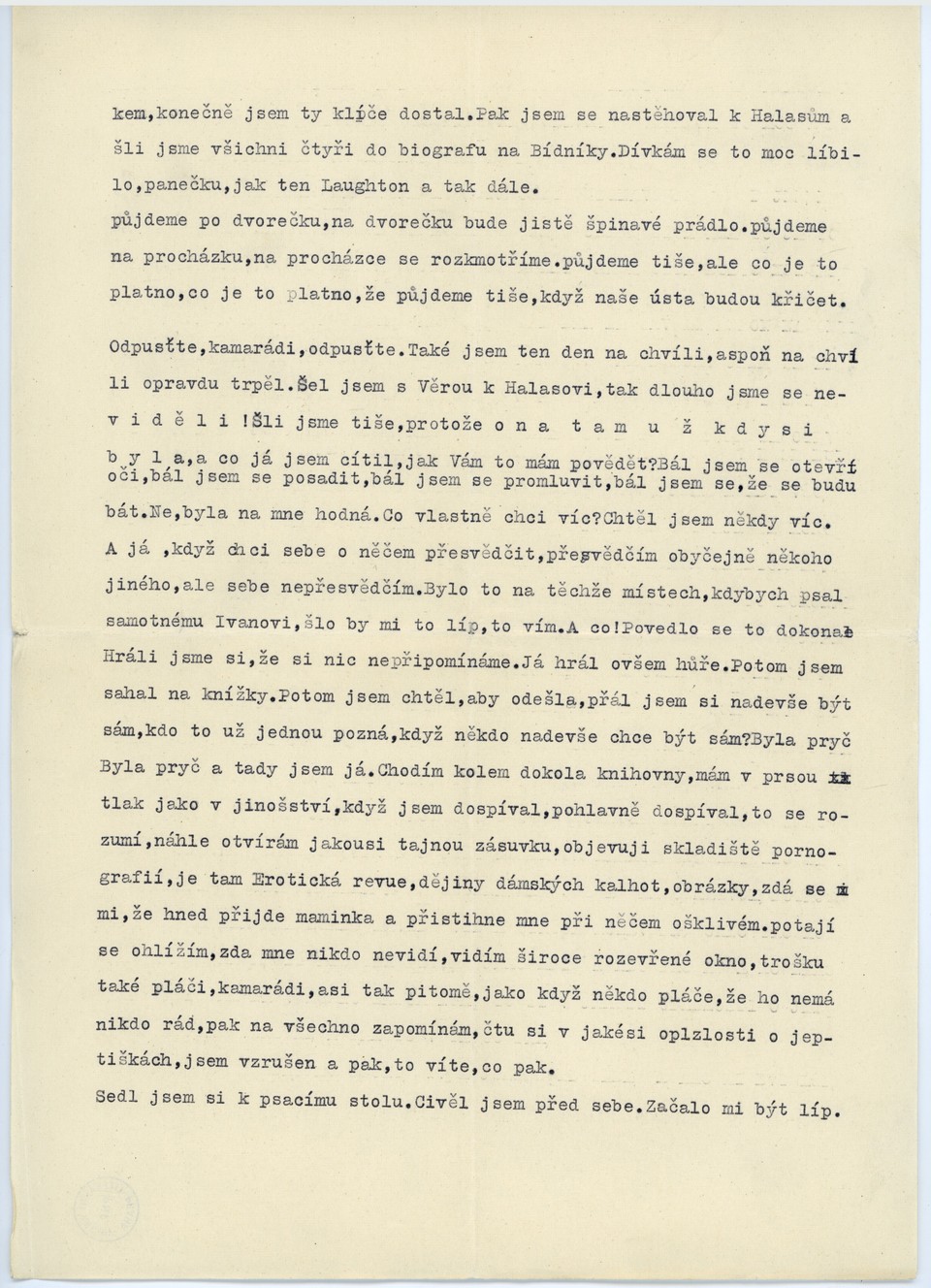 and I finally got the keys. Then I moved in with the Halases and the four of us went to the cinema to see Les Miserables. Boy, did the girls really like the film, especially Laughton and so on.
We will walk around the courtyard, there will certainly still be dirty laundry in the courtyard. We will go for a walk; we’ll have a falling out on a walk. We will go in silence, but what use is it that we will walk in silence, that we will go in silence when our mouths scream.
Forgive me, my friends, forgive me. I too for a while that day, at least for a while, truly suffered. Věra and I paid a visit to Halas, we hadn’t seen each other for so long! We walked in silence, because she had already been there once before, I was afraid to talk, I was afraid that I would be afraid. No, she was nice to me. So, what else could I want? Once I wanted more. And when I want to convince myself of something, I usually end up convincing someone else, but not myself. It was in the same places, if I had written to Ivan himself, I would have been better off, I know. So, what of it! It worked out perfectly. We pretended that we didn’t remember anything. But I was less convincing. Then I reached for the books. Then I wished above all to be alone. Who is able to suddenly realize when someone wants above all to be alone? She was gone. She was gone and here I am. I walk around and around the library, I have this pressure in my chest like during adolescence, when I was growing up, meaning sexually growing up, I suddenly open a secret drawer, I discover a stash of pornography, there’s Erotické revue (The Erotic Review), the history of women’s knickers, it seems to me that my mother will suddenly arrive and catch me doing something unsightly. I keep secretly looking back if anyone sees me, I see a window wide open, I cry a little too, my friends, just about as pitifully as when someone cries because nobody loves him, then I forget everything, I read in some pornography about nuns, I’m excited and then, you can imagine what follows.
I sat down at the typewriter. I gazed before me. I began to feel better.

A coldness came on me from the open window. The courtyard across the way was dark, I wrote a short poem, I was eleven o’clock at night.

O black birds without a land
For what are wings if not to be clipped
After all, the same the cold is everywhere
We shall also fly to paradise
With the mother of compassion and death

And there where you have your hearts
There is the greatest coldness
O sparrows, beggars of the home
What is there to sing about?

Love asks in vain
When there is no answer
And frost, perched on the branches, in all the trees chirp
Chirps from the trees

Then I was calm, tired, I tiptoed to the secret drawer and opened the Erotická revue again. It was exactly midnight, July 24th had ended.
If only I could drag it out for another ten minutes! But it’s late and I won’t die on this day as I had wanted. I hope you are having, a better time.

Other exhibits from the chapter Jiří Orten 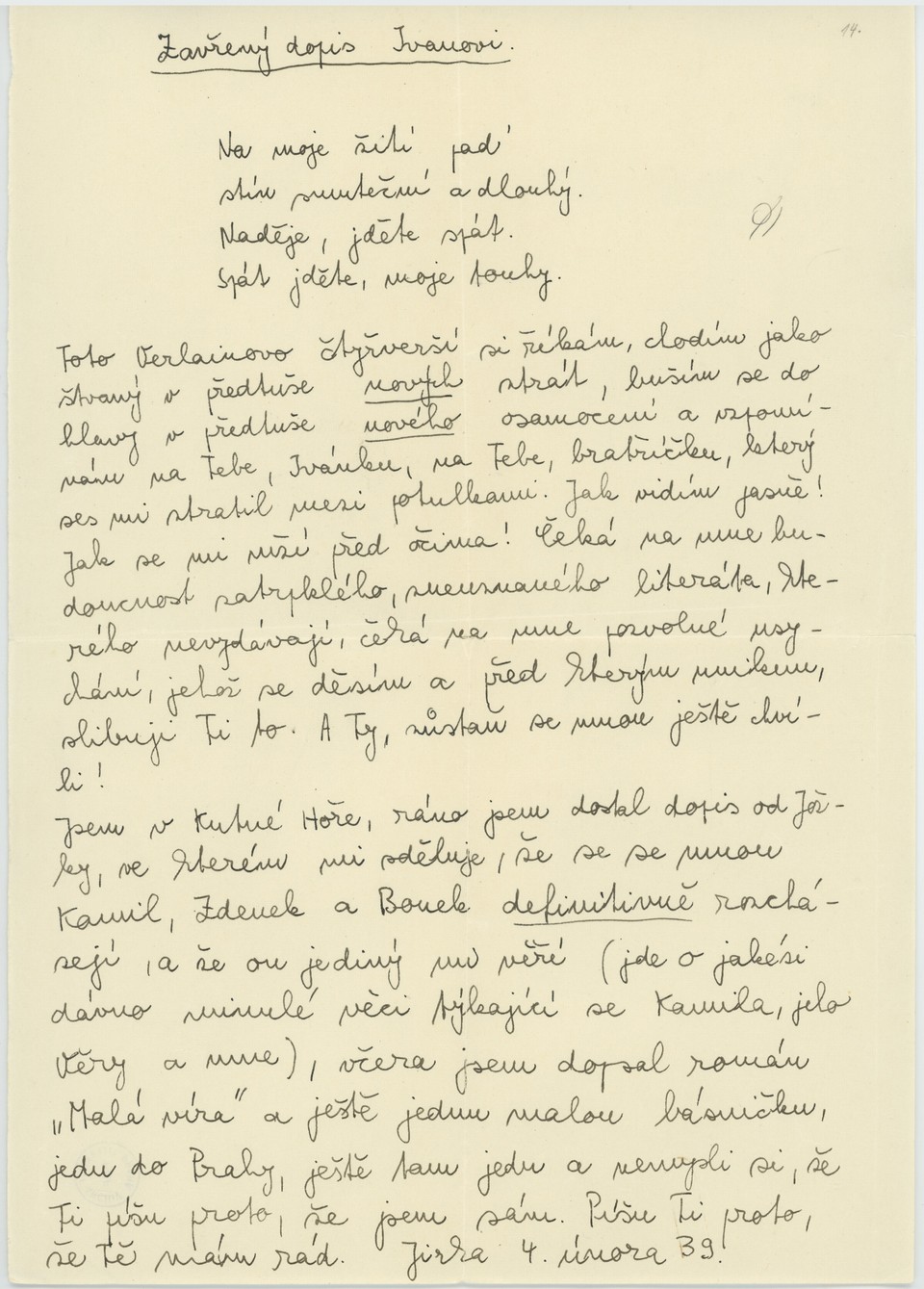 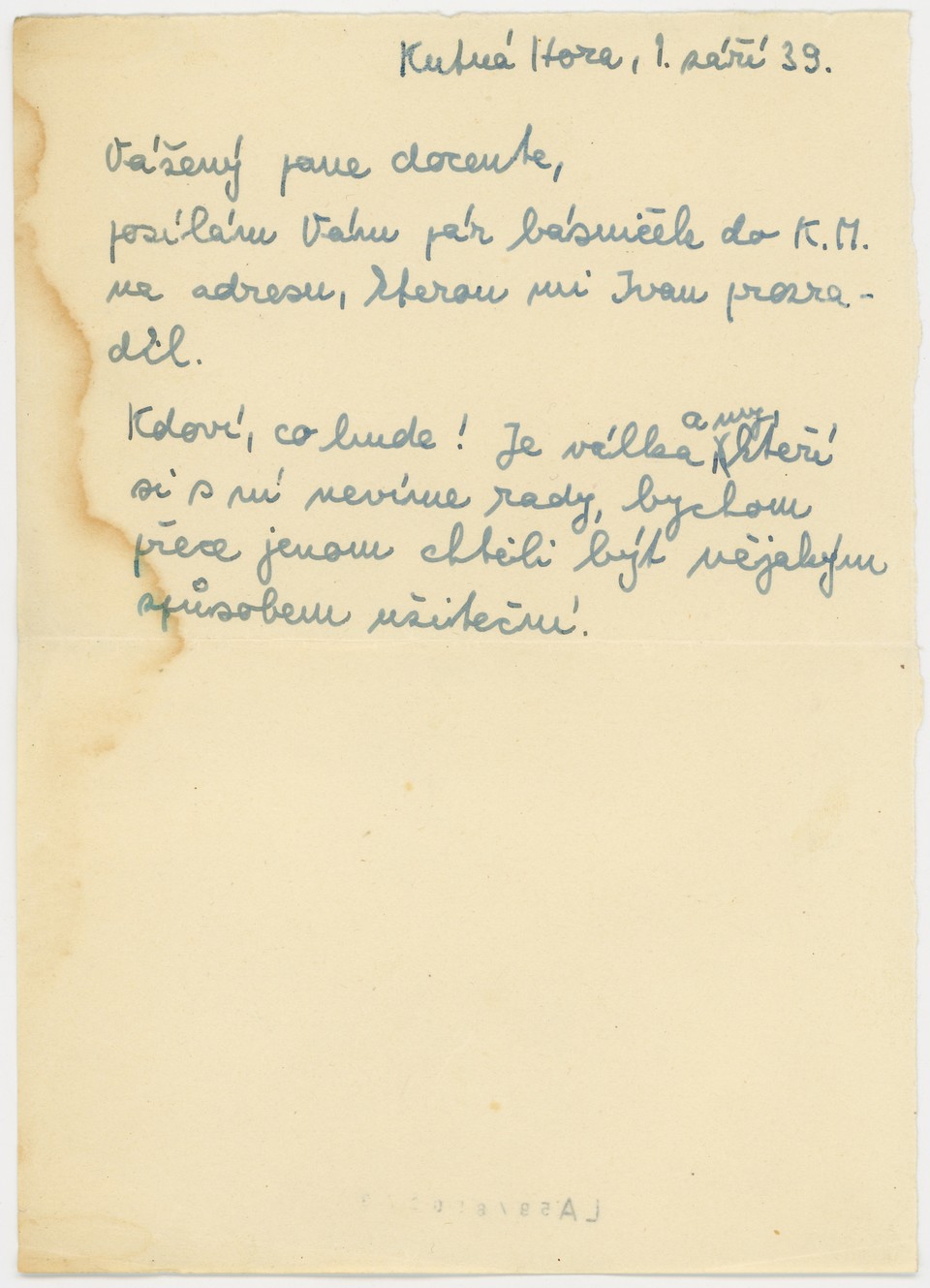 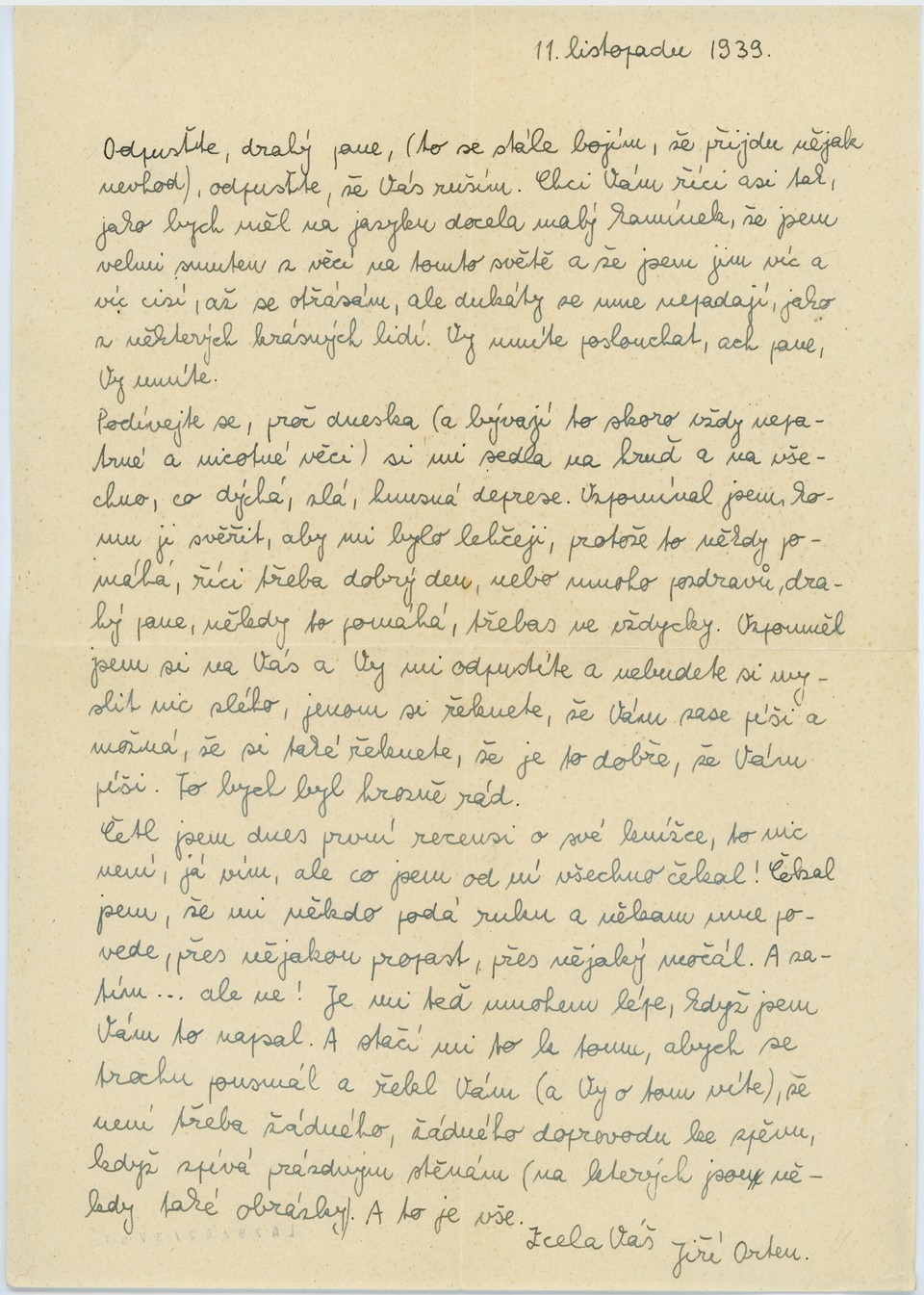 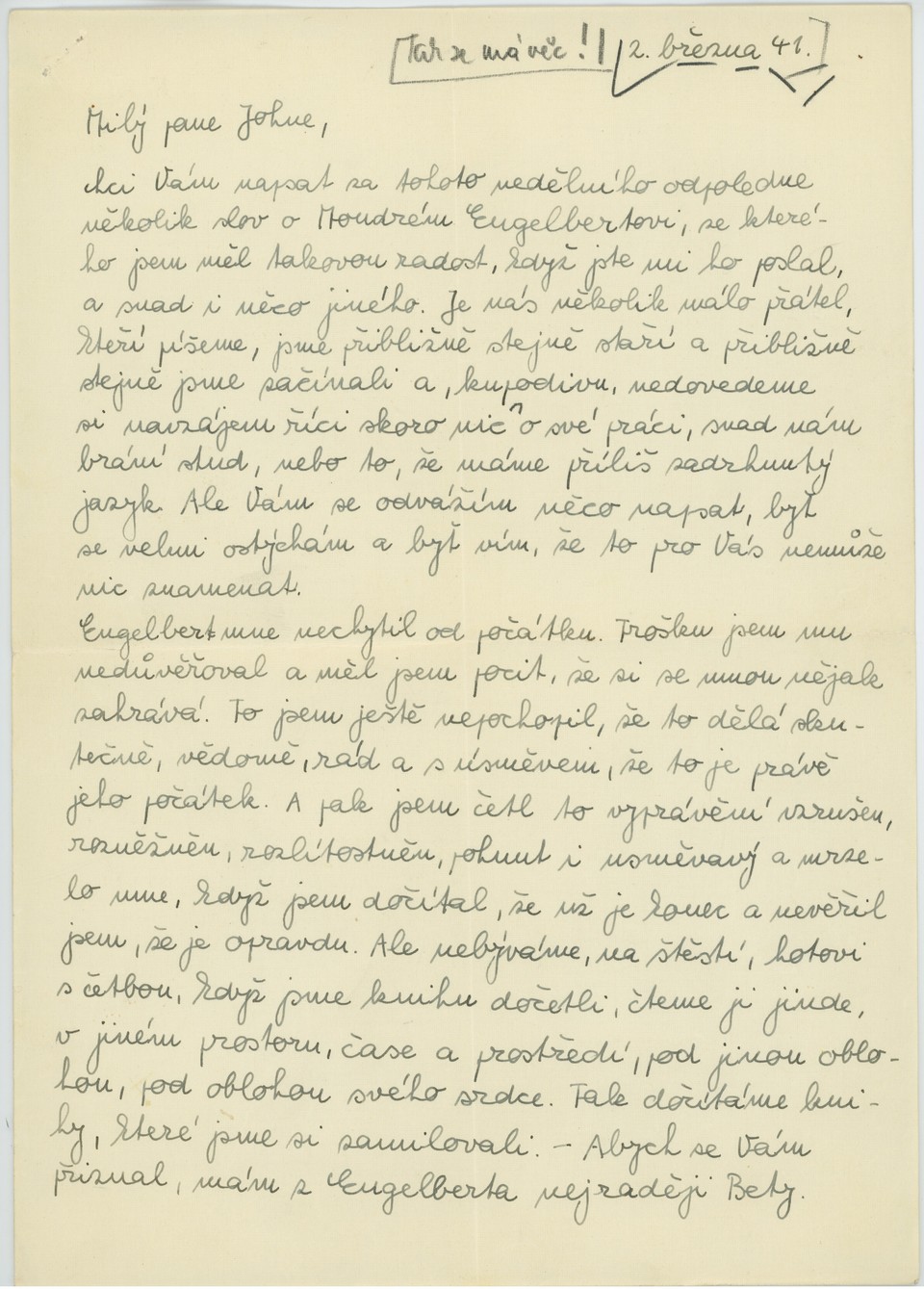